CONGRATULATIONS TO STEVE BOGNAR '81 & JULIA REICHERT ON WINNING AN OSCAR! 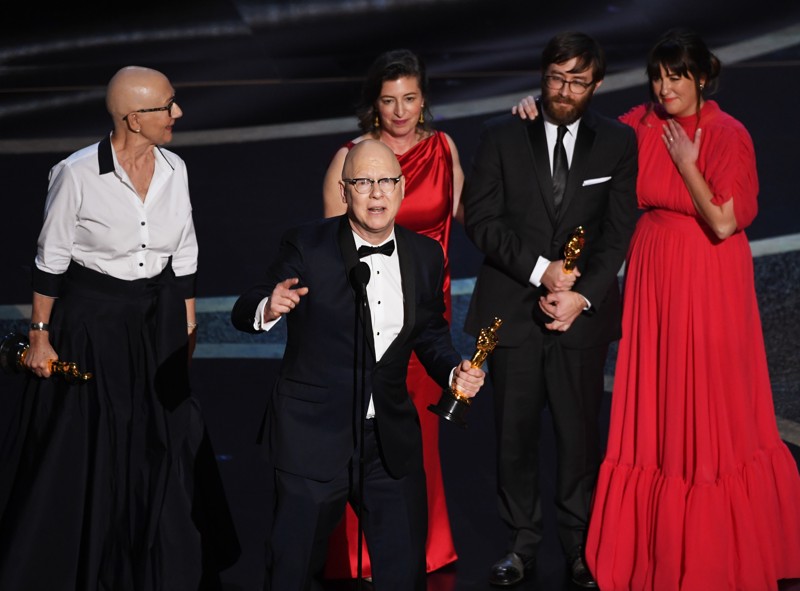 Hollywood’s most-prized golden man is coming home to the Dayton area with a local couple who live in a village named for its spring.

The film edged out “The Cave,” “The Edge of Democracy,” “For Sama” and “Honeyland.”

Reichert, a nationally acclaimed artist who has been called the godmother of the American independent film movement, is battling a rare and deadly cancer.

She and Bognar were exuberant during their acceptance speeches.

Bognar and Reichert, a couple together for more than 30 years, received an Academy Award nomination in the “Best Documentary (short subject)” category for their 2009 HBO film “The Last Truck” about the closing of that very same GM plant in Moraine.

Some of the stars of “American Factory” —  Dayton-area residents and former and past Fuyao Glass workers Jill Lamantia, Shawnea Rosser-Carter, Robert “Bobby” Allen, Wong He and Rob Haerr — and their guests attended the ceremony.

Reichert and Bognar were considered front- runners for the prizes having won the Directors Guild of America Award, the Film Independent Spirit Award and the Gotham Award Independent Film Award in the documentary categories.

The Oscar nomination is the fourth for Reichert and the second for Bognar.

Aside from “Last Truck” and “American Factory” with Bognar, Reichert was nominated for the first time in 1978 with James Klein and Miles Mogulescu for “Union Maids,” and again with Klein in 1984 for “Seeing Red.”

Go here to read more about how a Carroll High School connection contributed to an "American Factory."

“American Factory” was filmed in Moraine.

The Dayton area has a big horse in the race for one of Hollywood’s biggest prizes for the third consecutive year.

This film happened because of the incredible support we get from everyone in Dayton, Ohio.

Yellow Springs residents Steve Bognar and Julia Reichert’s “American Factory” has been nominated for the Academy Awards in the documentary feature category, after winning The Independent Filmmaker Project’s prestigious Gotham Award in December. The announcement was made Monday morning.

"This film happened because of the incredible support we get from everyone in Dayton, Ohio,” Bognar told this news organization. “We are proud to be from Dayton, Ohio today and we are grateful to be able to represent our town at the big show.”

“American Factory,” a critic’s favorite, was named to the shortlist for the Oscar nomination in December. The winning films will be announced Sunday, Feb. 9, at the 92nd Academy Awards ceremony. This is the third year in a row the Miami Valley will have a direct connection to the awards.

President Barack Obama and Michelle Obama’s production company, Higher Ground, in partnership with Netflix, acquired “American Factory” in April. It follows the creation of the Chinese-owned automotive glass-factory Fuyao Glass America in the same building that had once housed a General Motors assembly operation in Moraine.

Bognar and Reichert, a Yellow Springs couple together for more than 30 years, received an Academy Award nomination in the “Best Documentary (short subject)” category for their 2009 HBO film “The Last Truck” about the closing of that very same GM plant in Moraine.

Other films up for the 2020 documentary Oscar include “The Cave,” “The Edge of Democracy,” “For Sama” and “Honeyland.”

A local couple had a very big weekend in Utah.

Steve Bognar and his partner Julia Reichert, a Wright State University professor emeritus, picked up the U.S. documentary directing award for their film “American Factory” at the 2019 Sundance Film Festival in Park City.

Now Netflix is on the verge of buying the world rights to “American Factory,” according to Deadline.

Hollywood Reporter says the deal for the “culture-clash documentary” is just south of $3 million.

“Clemency” centers around a prison warden as she prepares to carry out the execution of a death-row inmate.

“American Factory” is set inside Fuyao Glass America in Moraine.

The film’s description on Sundance’s website reads:
In post-industrial Ohio, a Chinese billionaire opens a new factory in the husk of an abandoned General Motors plant, hiring two thousand blue-collar Americans. Early days of hope and optimism give way to setbacks as high-tech China clashes with working-class America.

Reichert and Bognar received an Academy Award nomination in the “Best Documentary (short subject)” category for their 2009 HBO film “The Last Truck” about the closing of that very same GM plant in Moraine.

Fuyao is located within the complex that once held a General Motors plant.

“Last Truck” was a third Oscar nomination for Reichert.

Her first film, "Growing Up Female," was selected for the National Film Registry of the Library of Congress.

Reichert and Bognar won the Exceptional Merit in Nonfiction Filmmaking Emmy in 2007 for their film “A Lion in the House.”

In 2009 Yellow Spring filmmakers Julia Reichert and Steve Bognar made a film based on the closure of the Moraine Assembly plant, a General Motors automobile factory on December 23, 2008. Reichert and Bognar spoke to several hundred of the nearly 3,000 workers at the plant who were to lose their jobs as a result of the closure. Lacking access to film inside the plant itself, the filmmakers supplied some of the workers with flip cameras to smuggle into the factory, allowing them to acquire footage of some of the final vehicles being assembled there. The film, The Last Truck: Closing of a GM Plant was picked up by HBO and was nominated for the Academy Award for Best Documentary (Short Subject) in 2009.

They just found out today their latest film, American Factory will debut this January at the Sundance Film Festival in the U.S. Documentary Competition. The category will showcase sixteen world-premiere American documentaries that illuminate the ideas, people and events that shape the present day.

When Steve Bognar called to share the news of the films acceptance into the festival he shared that the film is not yet finished. They submitted a rough cut for judging and crossed their fingers. They now have a pretty great reason to get the film finished, but he says there is still a lot of work to be done. And they’ll be taking some time out to go to California in December where Julia will be awarded the International Documentary Association’s Career Achievement Award for 2018 in Los Angeles.

American Factory was selected out of a record-breaking 14,259 submissions from 152 countries. Bognar said that the film was untitled until just two days ago. American Factory refers to what the Chinese call this venture and also to the inside look the film has of the business.

2019 is already shaping up to be a pretty major year for the filmmaking team as the Museum of Modern Art and the Wexner Center for the Arts will team up to present a traveling retrospective of Julia Reichert’s films later in the year.