Dr. Richard Campbell '67 Receives the 2021 Communications Award of the Joint Policy Board for Mathematics for Stats + Stories Podcast 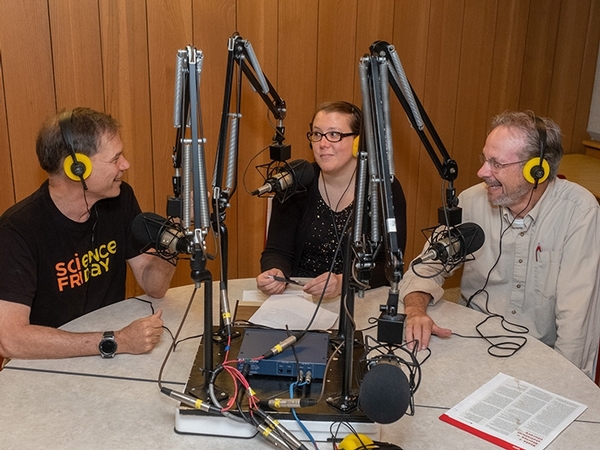 The annual award is designed to reward and encourage communicators who, on a sustained basis, bring mathematical ideas and information to non-mathematical audiences.

Campbell, professor emeritus and founding chair of Miami's media, journalism and film department, said that the ability for a mathematician or scientist to “translate the complexities of her work into a story for a general audience is key to challenging the anti-science and anti-evidence strains running through our mediated culture.”

He recommends every journalism student take a statistics course, and that every statistics and mathematics major take a journalism course, if possible.

Pennington, also a journalist and moderator of Stats + Stories, was a former science and medical reporter, which helped her develop a deep appreciation for "all that math can help us understand about our world," she said. “Sometimes, all it takes is the right story, or the right storyteller, to unlock the beauty of math for someone who may have struggled with it in the past."

She is currently an assistant professor of journalism at Miami, with a research focus on media representations of marginalized groups.

“One of my first reactions to hearing about this award was the recognition of the importance of partnering with good people,” Bailer said. He has collaborated with Campbell for more than a decade and with Pennington for the last six years.

The podcast team extends thanks to those who helped make the “on air” panel sound and look good — the sound and recording engineers and those involved with web page support and podcast / show production — including Bob Long, the podcast’s first moderator. They recognize the College of Arts and Science for facilities and other resources contributing to the podcast.

Campbell said “It has been an absolute pleasure working with our team on Stats + Stories. So much so that I keep doing it in retirement, still learning from the terrific guests we have had on the podcast over the years.”

They will receive the award with co-winner Erica Klarreich, writer and mathematician, during the 2021 Virtual Joint Mathematics Meetings in January.

"I was stunned. I thought my numerical literacy prowess had peaked during my Dayton, Ohio, high school days when I served as president of the sophomore math club. But to the point: It has been an absolute pleasure working with our team on Stats + Stories. So much so that I keep doing it in retirement, still learning from the terrific guests we have had on the podcast over the years."

At Miami, John Bailer and I had worked together to get a quantitative literacy requirement into our college’s curriculum. As part of that initiative, we team-taught an honors class called “News and Numbers” in 2009 and developed the podcast in 2013. As a one-time reporter and long-time journalism educator (with some math phobia issues), I remember how nervous I was in that first class with John. But when he put up a data graph culled from a national newspaper and asked the students, “What’s the story here?”, I relaxed. Storytelling is something I knew about and to realize this renowned statistician expected a good data chart to tell a story put me at ease. John and I had common ground. I do recommend that every journalism student take statistics courses and that every math and stats major take journalism courses (plus, all our high schools should be requiring quantitative literacy classes). The ability for a mathematician or scientist to translate the complexities of her work into a story for a general audience is key to challenging the anti-science and anti-evidence strains running through our mediated culture. John, Rosemary and I grateful are for this prestigious award … and proud of our Stats + Stories work. Thank you. (photo courtesy Miami University)

Campbell is Professor Emeritus and founding Chair of the Department of Media, Journalism and Film at Miami University. He is the author of 60 Minutes and the News: A Mythology for Middle America and co-author of Cracked Coverage: Television News, the Anti-Cocaine Crusade and the Reagan Legacy, and the lead author of three textbooks, including Media and Culture: Mass Communication in a Digital Age, now in its 12th edition. Campbell earned his B.A. in English from Marquette University and his PhD from Northwestern University in the Radio-Television-Film department. He also worked as a print reporter and broadcast news writer in Milwaukee. In his 48-year teaching career, he has also worked at Mount Mary College, UW-Milwaukee, Middle Tennessee State University, and the University of Michigan. In addition to the Stats + Stories podcast, his most recent projects include the digital Oxford Observer and Report for Ohio -- initiatives aimed at getting more young journalists real-world experience and hired to cover under-reported areas in both rural and urban communities. He is also the executive producer of Training for Freedom: How Ordinary People in an Unusual Time & Unlikely Place Made Extraordinary History, a 2019 documentary on Oxford’s role in the historic events of Freedom Summer in 1964. A former high school English teacher and girls’ basketball coach in the Milwaukee Public School system, Campbell grew up in Dayton, Ohio, where in 2015 he served on the city’s planning committee for the 20th anniversary of Dayton Peace Accords. In 2019, Campbell received Miami University’s Benjamin Harrison Medallion Award "For Outstanding Contribution to the Education of the Nation."

Tags: award, Campbell, Miami
Posted in Alumni in the News