Home / About / Carroll Newsroom
Posts Tagged "Carroll on the Go" 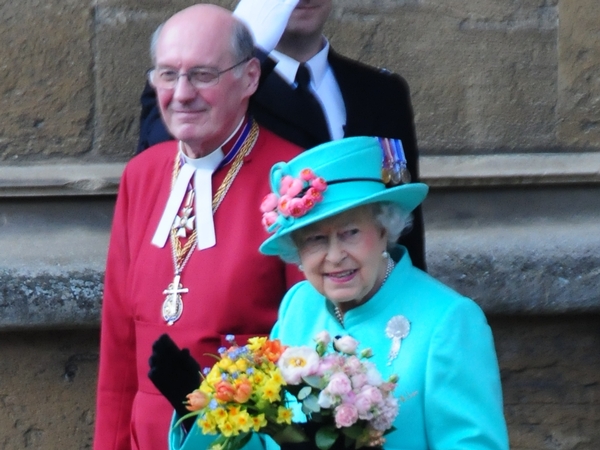 Editor's Note: A planned ten day tour of London, Paris, and Normandy for 20 members of the Carroll community nearly ended before it began. Social Studies teacher Chris Sorrell ‘83 was part of that group that ended up face-to-face with the Queen of England in a royal garden. This is his account of the events that lead to this once-in-a-lifetime experience.  All photos that accompany this story were shot by Chris Sorrell '83.

It was, in a word, unlikely.

I had the great pleasure to accompany ten Carroll students, two fellow teachers, and seven parents on a spring break trip to England and France. This story doesn’t begin too well, but trust me, it gets better.  We arrived at the Cincinnati airport on Thursday for our flight to London only to learn that, because of a pilot shortage due to recent weather, we had to go back to Dayton and try again tomorrow.Unshaken, that’s what we did. We returned Friday, and this time, tickets in hand at the gate, were told “no pilots, try again tomorrow.” While teachers Andy Seyfang and Sarah (Sidell) Seagraves ‘09 tried to work magic at the service desk, it was to no avail. Our only option was to send half our group on Saturday and the other half on Sunday to Paris, not London. We had missed the England leg of our trip. Disappointed, but determined, that’s what we did.

France was, of course, fantastic, and throughout our travels, Andy tried to rescue the British leg of our trip with an endless series of international calls. On Good Friday, at Notre-Dame Cathedral no less, we learned that we would extend our trip through Easter weekend in London! A train ride under the English Channel later we arrived at the only hotel available on Easter short-notice, a 5 star place in Kensington called The Xenia that had likely never hosted American teenagers before. I told you it gets better, but just wait. We’re getting to the good part.

After a whirlwind trip through London on Saturday, Laurent, our tour guide and French ex-patriot who lives in Brighton, England, decided we’d start Easter Sunday early at Windsor Castle and then attend Mass at a Church in Windsor. Here’s where it gets truly odd. 30 minutes after arriving at Windsor Castle, a docent asked Laurent if his group, the 20 of us and 10 from North Carolina, was there for the service. While Laurent had no idea what service the docent was referring too, he quickly replied, “The service? Of course!” and we were quickly shuffled through additional security. We followed some very well dressed guests through the castle grounds and found ourselves stopped, without passes, at St. George’s Chapel. Laurent quickly figured it out; this was Easter Service for Queen Elizabeth and the Royal Family.

While we learned we weren’t supposed to be there, the Queen’s security staff could not have been nicer. They told us that the service would begin shortly, we were welcome to sit on the lawn outside the chapel, and the service would be amplified through speakers out to the lawn. Andy got the kids together and they quickly decided we were going to stay and spend Easter morning with Queen Elizabeth. In no time, the Queen’s guards, red coats and all, came marching up the drive. Four Bentleys, one with a little crown on top, pulled up not even 12 feet in front of us. The attending Royal Family marched down the walk and formed a receiving line in front of the chapel, and Queen Elizabeth stepped out of the car.

The 30 or so of us clapped politely, and the four professional photographers snapped away. Surreal is an overused word I’m afraid, but this truly was. We were separated by a ropeline, a skip, and a jump from the Queen of England, celebrating Easter and her record 65th year as Monarch. Our kids were amazed and amazing. With no preparation for this moment, their decorum was respectful and sophisticated. The Queen’s personal guards remarked on that fact to us during the service, and even gave each kid the official missal from the service. They were just American kids on holiday in London, but thrust into a once-in-a-lifetime moment, they represented Archbishop Carroll High School beautifully. We listened, we prayed, and some sang along with the Royal Choir. We heard the Bishop talk of the importance of spirituality to British soldiers throughout the years. It was a beautiful service even from the lawn, surrounded by the historic walls and gardens of Windsor Castle. When the service was complete, Queen Elizabeth walked to her awaiting car and looked surprised as she waved at those smiling American kids who weren’t even supposed to be in England that morning. We were supposed to be back home already, at St. Helen and St. Brigid and St. Peter and the like; but there we were, unlikely participants in the Royal Family’s Easter Service.

The Queen rode away to a family brunch. No, we weren’t invited, but we made a memory for the ages. We exited the garden through King Henry VIII Gate. The Royal Guard marched away. We searched and found the docent who mistakenly had sent us through. Laurent was worried she may have gotten herself into some troubles. “No worries,” she said with a grin, “it was but a happy accident.”

That evening, the BBC News at 10 commented on the “unlikely well-wishers” at the Windsor service. That was us. If I live to be 100, nothing that unlikely will ever happen to me again. And I couldn’t be prouder as a teacher and as Carroll alumnus of the maturity and respect our students displayed that Easter morning. It was a great and royal day to be a Patriot.

Tags: Carroll on the Go, Class of 1983, Queen Elizabeth
1 comment
Sheryl Jennings McGurk says:
What a lovely memory and gift. Thank you for sharing it with us. God always has a plan! It was meant to be!